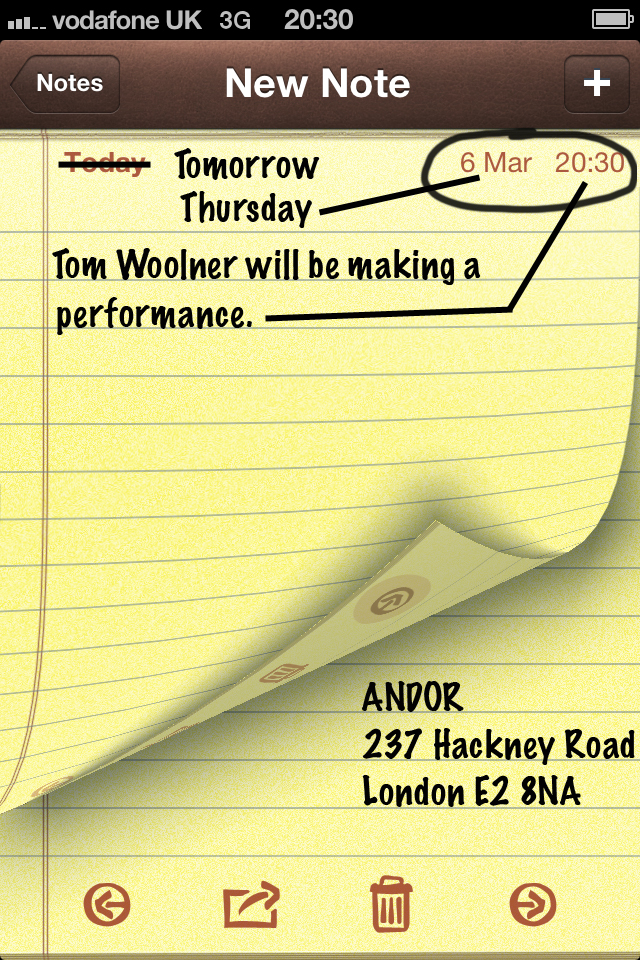 Does it have to be an opera now?

Artist Tom Woolner is developing new sculptural artworks and performative interventions in the gallery spaces at ANDOR. The exhibition project continues ANDOR’s support of emerging contemporary artists in the production of new artwork. Woolner, starting from the basis of installing a functioning studio space in the gallery, will engage in collaborative processes that explore his interests in sculpture, recorded sound and live performance. The project, open by appointment, offers presentations of the artist’s studio to the viewer, with artworks and installations continually changing over the course of the exhibition. The project culminates with a closing studio event in which experimental performances expand Woolner’s artworks, testing and stretching his practice through the use of sound and music.

Tom Woolner (1979) lives and works in London, UK. Woolner studied at The Ruskin School of Drawing and Fine Art, Oxford University; before completing an MA in Sculpture at The Royal College of Art, London, in 2003. In 2002 he was awarded the Kyoto University of Art in Japan scholarship and in 2011 he was selected for a Site Gallery Platform Commission. In 2006 Woolner received the Danish Arts Council Award for International Artists and in 2003-2005 he was artist in residence with the Peabody Trust in London. Recent solo exhibitions include Self Portrait as a Plank of Wood, Tintype, London, 2012; An Evening with Archimboldo, Site Gallery, Sheffield, 2011. Group exhibitions include Glass Cat 2, Wimbledon Space, University of the Arts, London, 2014; Stopped Clocks in Places of Busyness, FOLD Gallery, London, 2013; The Stone of Folly, Downstairs at Great Brampton House, Hereford, 2012; Writtle Calling / 2 Emma Toc, a temporary radio station, curated by Melissa Appleton, Writtle College, Essex, 2012; and Temporary Residency in the Unconscious, Art House Foundation at V22, London, 2012. Selected performances include After/Hours/Drop/Box, curated by John Lawrence, ANDOR, Modern Art Oxford and Spike Island, 2012/2013; Supernormal 2012, Braziers International Workshop, Oxfordshire, 2012; More Soup and Tart, Barbican, London, 2011; The Inside Out Cave is You! Galleria Moriarty, Madrid, Spain, 2011 (Collaboration with Lilli Hartmann); Radio IPS, International Project Space, Birmingham, 2011; Skinjobs, The Two Jonnys, London, 2010.