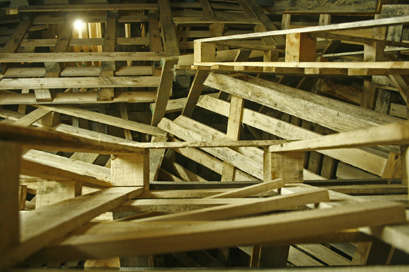 DEBT collective Artist Sean Millington and Arnar Omarsson collaborated on their first show at ANDOR with the installation, ‘Pompidou’s AR-SE’. The inspiration for ‘Pompidou’s AR-SE’ derives from the environments and relations created within the existing space of the ANDOR gallery. The potential to create something new from that which already exists, whether this becomes physical, conceptual, relational or an experience that is created by the viewers interaction/participation.

Pompidou’s AR-SE is essentially about a gallery in a basement of a greasy spoon that’s converted into a nightclub twelve times a year. The name of the piece derives from the inspiration taken from the architecture of Paris’ Pompidou centre. The gallery space is turned inside out, created completely afresh with an installation created from hundreds of found wooden pallets from the local area forcibly broken into on the opening evening.